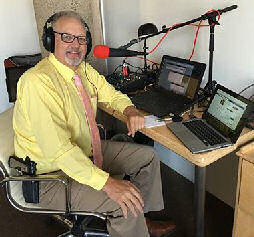 Remember folks, Doc depends on his sponsors to support his show and those sponsors depend on your support. These products not only help Doc but they are great products that could help you. If you cant buy then just contact them and let them know you appreciate their sponsorship of his show.

Doc Greene was born in Lusk, Wyoming and was raised on a cattle ranch, where they lived the cowboy life. As a youth on that 4000 acre ranch, Doc Broke horses and worked on cattle drives every year.
He joined the Air Force in 1972 after graduating high school and studied aircraft mechanics and electronics and played music to make extra money with other airmen.
After his honorable discharge from the Air Force, he toured nationally with his band for several years.
In 1994 he started his own company to design, calibrate and service home theater equipment, and residential electronics. His company has been written up in Forbes Magazine, Texan Monthly and Home Toys magazine and is recognized as one the top home theater design firms in the United States.
Doc is a registered outreach instructor for the Custom Electronics Design Installation Association known as CEDIA.
Doc has a bachelor’s degree in ministry and when he is not calibrating TVs he and his band go to nursing homes and entertain the folks as Blues Other Brothers.
Doc has had a long interest in politics and its effect on the American family. Though he was a registered Republican for many years and was often the only representative to state conventions from his precinct, he is now a Tea Party supporter, True the Vote volunteer, and recently nominated by his Texas Nationalist Movement group for outreach director.
He is married to his high school sweetheart, JoAnne, for 41 years and has 4 children and 9 grandchildren.
You’ve heard him for years on Houston radio on AM 700, AM 950 and 92.1 FM.