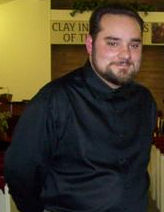 Anthony was born March 30th, 1978 in Wayne, MI. At the age of nine years he put his faith and trust in the Lord Jesus Christ. Praise the Lord!!

As a young christian he felt the call to preach and began doing so whenever The Lord gave him opportunity. His parents were very involved in ministry and encouraged their children to do so as well. They went street preaching, played instruments and sang, worked in the bus ministry and sang at retirement homes.

At the age of twenty Anthony and his future brother-in-law Keith started a ministry called “The G.I. Evangelists”. They traveled across the country preaching, singing, and doing construction work on small churches. Their work was very diversified from shearing sheep, to laying floors, to building!

Eventually, the Lord led Anthony to settle down in Payson, AZ. where he served as the Youth Pastor at Payson First Baptist Church for over six years.

Anthony and his wife Christy (Hoover) Garrisi were married on Feb 11th,2000. They have three rambunctious, wonderful little boys and two beautiful daughters. They were also blessed to have a daughter on January 25th, 2005. She went to be with the Lord 13 days later. What a joy she was for the short time she was here!

Anthony was homeschooled from 7th grade through 12th, has worked under several Pastors, and has attended local church Bible Institute for over six years.

He has always had a love for radio. When he was ten-years-old his parents felt the need to remove the TV from their home, so Anthony and his brother grew up listening to old-fashioned radio for entertainment. For many years now the Lord has allowed Pastor Anthony to host a weekly, live, call-in radio show dealing with contraversial issues directly related to the church. Ironicly Pastor’s brother Dominic also broadcast daily with a christian station in his local area as well.

He believes strongly in The King James Bible as the perfectly preserved Word of God. Pastor Anthony opposes this “New Evangelical, Modernistic, Ecumenical,” religion found in the majority of churches . He believes the only hope for Christianity today is to fall in love with Jesus and His word, and to seek his approval in every aspect of our lives instead of man’s.

In Feb of 2007 Pastor Anthony was ordained by the ministers and men of Payson First Baptist Church. He officially took over as pastor on Feb 25th 2007. Pastor Anthony’s desire is for the Lord Jesus to be glorified, and the Spirit of God to have free reign in every aspect of the affairs of the church.